Dr. Walrath also performs a great deal of blepharoplasty and brow procedures for men.  Two examples of recent surgical patients are seen below.  Both of these patients demonstrate a few important principles:

1. Eyelid and eyebrow position can never be considered independently.

2. The office evaluation is the most important part of the surgical relationship, and it sets the stage for surgical and nonsurgical decision-making that ultimately determines the success of the procedures. This is one of the strongest arguments for choosing an oculoplastic surgeon for eyelid surgery, as opposed to any other type of surgeon.  By choosing a surgeon who has a deeper understanding of the structure and function of the region around the eyes, the patient is more likely to be taken down a course with a greater chance of success.

Surgical Planning. The patient complained that the brows and eyelids were obscuring his vision.  In addition, he complained that the bags in the lower lids were bothering him as well. The most striking feature of this examination was the inner droop of the brows, which gave the patient an “angry” appearance.  Treating this was a critical part of the surgical plan.  A careful examination revealed, in addition to brow droop and excess tissue above the upper lids, that the left upper lid itself actually drooped (ptosis).  This is demonstrated when Dr. Walrath manually lifted the brows and peered beneath them.  The observer can see that the lid on the left barely clears the light reflex from the flash of the camera.  This droop was also critical in the surgical planning.  Finally, the patient was concerned about the bags in the lower lids.  This lower lids tend to sag, exposing much more of the white of the eye than normal.  Tightening the lids with a canthoplasty would be required as part of the lower blepharoplasty. 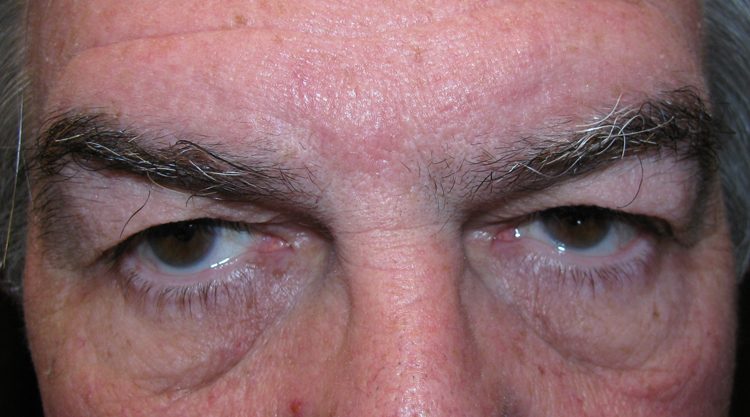 The Surgery.  In this case, the brow droop was treated with a “skip” direct brow lift, which focused the power of the lift squarely over the inner part of the eyebrow. The left upper lid was lifted with an internal approach (mullerectomy).  The excess upper lid tissue was removed from both upper lids (blepharoplasty).  The lower lids were detached and tightened (canthoplasty).  The excess tissue of the lower lids was removed and the skin and muscle was redraped utilizing an incision that went all the way across the lower lashes (transcutaneous lower blepharoplasty). 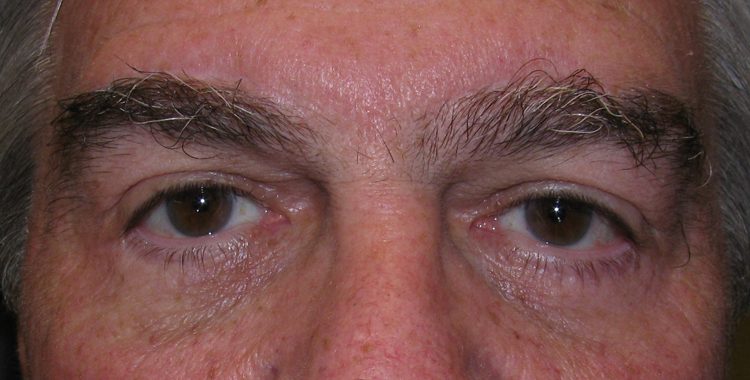 Postoperative Critique.  The postoperative photo is 7 months after surgery. The patient no longer has an “angry” look.  The upper lids are now the same height.  There is a uniform amount of the upper lid visible on each side.  The lower lid fat bags are gone, and the lids sag less.  The “white” of the eye is no longer visible above the lower lid margin.  All incisions are imperceptible.

Surgical planning.  The patient complained of decreased vision in both eyes due to tissue overhang.  The lateral brows have descended below the bony eye socket rims.  The brows are quite heavy.  There is also some heaviness where the brows meet the nasal bridge, though this appears less so than Case 1. 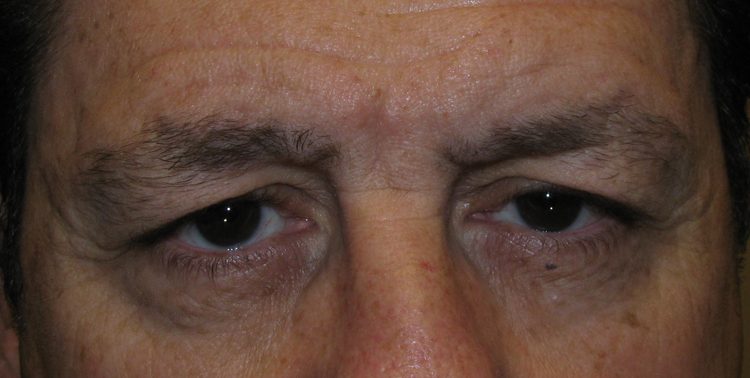 The Surgery.  In this case, the excess upper lid tissue was removed (blepharoplasty).  Using the blepharoplasty incision, the muscles depressing the brow medially were released (transblepharoplasty corrugator release).  Using the same incision more laterally, the brow was freed up just above the bone and supported with two sutures on each side (internal browpexy).

Postoperative Critique.  The postoperative photo is 5 weeks after surgery. The patient looks much younger.  His vision has improved.  There is good brow definition and good eyelid symmetry.

As can be seen, Dr. Walrath has created a more refreshed look, without the unnatural look that has been seen in certain notable celebrities.

Significant portions of each patients’ surgeries were covered by their insurance carrier.  It was clear preoperatively that the lids were impacting vision, and all of the appropriate testing was done to provide this evidence to the insurance carriers.